A fantastic opportunity to overnight in the capital of Connemara, the beautiful town of Clifden. You will be staying at the famous Abbeyglen Castle Hotel or the Four Star Station House Hotel. Experience two days of touring in this most beautiful region with 24 hours in Clifden. This tour offers exceptional value and a dinner, bed and breakfast are included as part of this package. 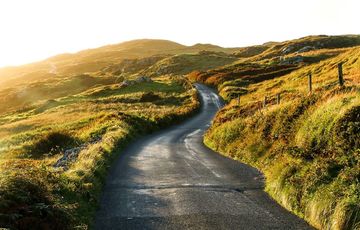 Check-in for 07:35am departure from Dublin Heuston, opened in 1844 as the headquarters of the Great Southern & Western Railway, which is now the official principal station of Iarnród Éireann, Ireland’s national railway company. As your train departs, travel in a south westerly direction, through Dublin's western suburbs and then through the lush fertile countryside of Co. Kildare. Journey through the Curragh, which is famous for its racecourse, home of the Irish Derby, and there are many stud farms in the vicinity. Your route takes you into the midlands and the Bog of Allen, vast tracts of peat-land. Before then, pass through the County Town of Tullamore and then to Clara across the gentle farmlands of north Offaly. The train crosses the Shannon, which marks the historic border between the province of Leinster and Connacht – the historic province of the West of Ireland. You are now heading west, surrounded by peat bog on both sides of the line. On the last few kilometers before Galway, you will get your first glimpse of Galway Bay.

Arrive in Galway, transfer to your waiting coach and strike out along the shore of Galway Bay and into the magnificent scenery of this region known as Connemara. Your lunch stop is in the pretty little fishing village of Roundstone with its fabulous views over the bay to the Twelve Bens mountain range. Your next stop is at a unique coral beach on the wild Atlantic Coast. See the bogs where Alcock & Brown crash landed in 1919 after the first ever Transatlantic Flight. Next, arrive in Clifden, with views of the spectacular Sky Road. Arrive to your hotel accommodation for the night. 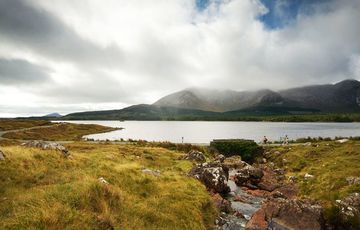 Enjoy your full Irish Breakfast at leisure with free time in the morning.

03:00pm - Depart Clifden, where you will be picked up from your hotel, to continue your tour of Connemara. Experience beautiful mountain scenery though Letterfrack and pass by Kylemore Abbey and lakes.

Take in the Inagh Valley with the Twelve Bens on one side and the Maamturks on the other. Enjoy lovely views throughout and all the way back to Galway.

After your day of touring you will be returned to Galway Station for your return train to Dublin.