Did you ever want to walk through history? Are you curious about the city that has at its roots the story of Ireland? Then you won’t want to miss this experience! Derry is a city on the move and one filled with places of interest and things to do. When you’re finished with all this city has to offer, why not take a more relaxing look at some of Ireland's Northern Headlands. Untouched, and virtually unexplored, this ruggedly beautiful and remote region lies at the far north of the Wild Atlantic Way. It’s no wonder Donegal was named the 'Coolest Place on the Planet' by National Geographic Traveler in 2017. 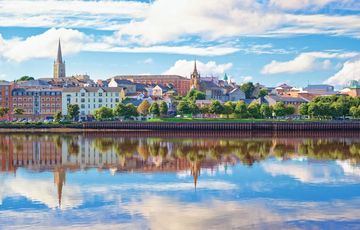 The Museum of Free Derry tells the story of how a largely working class community rose up against the years of oppression it had endured. The museum and archive have become an integral part of Ireland’s radical and civil rights heritage.

The civil rights movement in Ireland has its deepest roots in Derry. It was here on 5 October 1968 that the issue of civil rights in the north first came to the attention of the world when the police attacked a peaceful demonstration in Duke Street. It was here that the first no go area was declared in January 1969, when the defiant slogan ‘You Are Now Entering Free Derry’ appeared on a gable wall in the Bogside. 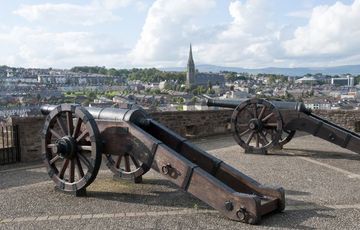 Tour Ticket Ireland offer a walking tour of Derry Bogside that gives students and tourists a firsthand and onsite analysis of the Bloody Sunday story in Derry City. This comprehensive tour will give an educational insight to the Civil Rights era, Bloody Sunday and the conflict that ensued. This hour long walking tour in Derry will also retrace parts of the original March and visit places where the dead and wounded fell.

The Bogside History Tour will examine the political and social repercussions of Bloody Sunday. The day of the march and the wounding and killing of the innocent civilians. The tour will pass The Museum of Free Derry and conclude at the Bloody Sunday monument within sight of Free Derry corner and beneath the city walls of Derry.

When you finish Bogside History Tours, the guide will accompany you to the Bentley Restaurant situated on the city walls, where you can have lunch. Please show your booking confirmation to staff in the venue. When you finish lunch in Bentley, please make your way to the Tower Museum, also located on the City Walls. 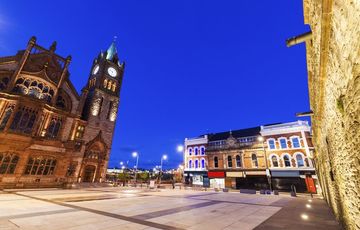 When you complete your visit to the Tower Museum make your way to the Guildhall directly facing the Museum, to finish your day’s experience. 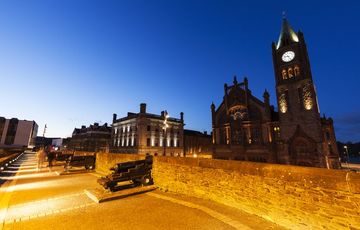 The original town hall was built in the 1600s in the Diamond area of the city and was destroyed during the siege in 1689. The Guidhall was built in 1887 by 'The Honorable The Irish Society' on land reclaimed from the River Foyle at a cost of 19,000 pounds (equivalent of 1.5 million euro today). The building was named in honor of its connection to the City of London and its guilds.

It was officially opened in 1890 as the administrative center for Londonderry Corporation. It is the only surviving guildhall still in civic use in Ireland.

Over its 120 year history the Guildhall has been destroyed twice - by fire in 1908 and through bomb attacks in 1972. The grade 'A' listed building has many significant features and stories to tell. For example:

- 23 stained glass windows. They tell the story of the city and many were gifted by the London Companies.

- The Guildhall Clock was designed as a replica of 'Big Ben' in London and was the largest of its kind in Ireland.

- A time capsule buried under the building when the foundation stone was laid in 1887 was recently uncovered. Its contents are on display inside the Guildhall.

- From 2000 to 2005, the Guildhall was the seat of the Bloody Sunday inquiry headed by Lord Saville, which was published in June 2010. 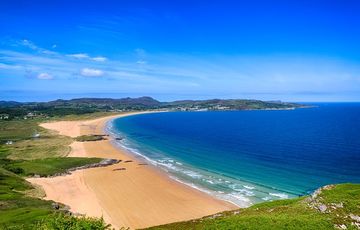 Untouched and virtually unexplored, this ruggedly beautiful and remote region lies at the far north of the Wild Atlantic Way. It’s no wonder Donegal was named the 'Coolest Place on the Planet' by National Geographic Traveler in 2017. Your Donegal Tour will include the following:

A combination of informative story telling and life size exhibits provides an informative, thought-provoking and at time humorous look at Irish life.Attractions include original thatched Irish cottages (inhabited as recently as the 1980s), an Eviction Scene, Orange Hall, Republican Safe House and Irish Wake House, among others.

The Donegal Tour requires at least 10 persons to travel.

You will pay €9.50 when you arrive at the village.

The tour lasts for 8 hours.

Pick up is at 11am on Monday, Wednesday, Friday and Saturday from the address below:

Tour Ticket Ireland is an innovative and dynamic company, organizing and developing visitor experiences, so that our customers can experience the brilliant sights, locations and attractions that the island of Ireland holds. Our ethos is built on the values of trust, honesty and service, which make our tours unique, authentic and fun, so that you, the customer, can embrace the amazing friendliness and spirit of our people, during your tour of this wonderful country. Tour Ticket Ireland was developed through a collective experience of professionals, across many sectors, so the service draws skills, learning and knowledge that will make your visit enjoyable, engaging and most importantly memorable.