Experience one of Ireland’s most famous cultural and historical nights – The World Famous Medieval Banquet in the Great Hall of Bunratty Castle, staying overnigh in quality hotel accommodation in Bunratty Village and enjoying a tour to the Cliffs of Moher and Galway Bay the next day. With time to explore Galway City on Day 1. 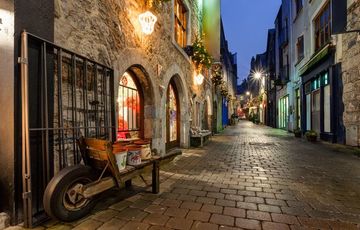 Galway City is one of the fastest growing cities in Europe. It began as a small fishing village centered around the estuary of the River Corrib, a river traditionally called Abhainn na Gaillimhe (The Galway River) after Galvia, a mythological princess said to have drowned in its waters. There is vibrancy to this friendly University City, which many delight in, and few forget. Music, festivals, horse racing, pubs, restaurants, shops, theatres and most of all Galway people, combine to create an atmosphere you'll want to return to again and again. 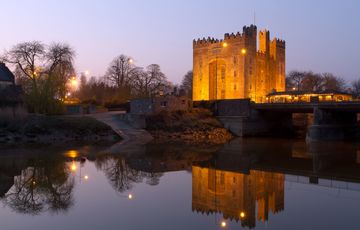 Bunratty Castle and the Cliffs of Moher Tour

Note: Check-in is 20 minutes prior to Train Departure Time. Customer Service Desk at Heuston Station where Railtours Ireland Check-In representative will be in their yellow jacket!